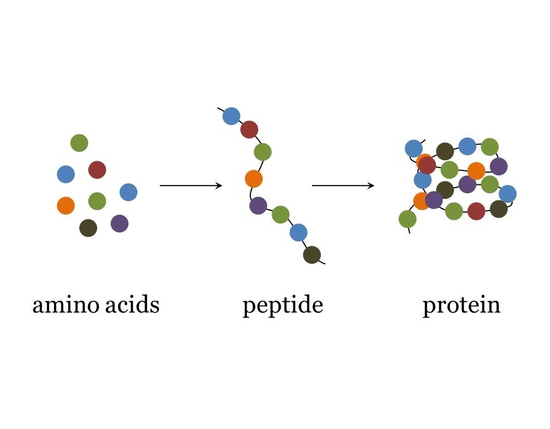 What are the Differences?

Peptides and proteins, while similar in many regards, have several key differences that are important to understand. Oftentimes the terms “peptide” and “protein” are used synonymously, but differing characteristics and biological activities between the two compounds prevent the terms from being totally interchangeable. To fully appreciate the differences between proteins and peptides, it is important to understand amino acids, the building blocks of both, and how all three (amino acids, peptides, and proteins) relate to one another.

Amino acids are small but biologically vital compounds containing an amino group (NH2) and a carboxylic acid group (COOH) as well as a side-chain structure that varies between different amino acids. While hundreds of amino acids are known, only twenty are genetically combined into peptides (such as arginine, lysine, and glutamine), while others can be combined synthetically.

Importantly, amino acids make up the building blocks of peptides. When amine and carboxylic acid functional groups in amino acids join to form amide bonds, a peptide is formed. Combining two or more amino acids, whether naturally or synthetically, results in the formation of a peptide. The shortest peptide, containing two amino acids, can be referred to as a “dipeptide.” A peptide three amino acids in length is a “tripeptide,” and so on.

Scientists commonly differentiate between proteins and polypeptides based on their size and structure. Regarding size, a polypeptide composed of more than 50 amino acids is generally classified as a protein, though the minimum categorization threshold can range from around 40-100 amino acids. However, 50 is a general guideline.

Peptide Vs. Protein: Which Term to Use?

Importantly, all proteins are technically polypeptides. However, as a researcher, it can sometimes be useful to differentiate between the two and reserve the term “proteins” to refer to relatively long and structurally fixed amino acid chains. Accordingly, peptides will generally refer to shorter (sub-50) amino acid chains.